In my opinion, it’s not October until you’ve consumed something involving spiced apple. Plus, Cornwall is thriving with apples at the moment and the cooler temperatures have me craving warming, spicy sweet treats!

After a number of fresh autumn walks this weekend – involving scarfs, thick socks and a few showers of rain – I decided to pimp up one of my favourite recipes, to add an October kick. Traditionally a frangipane is served cold, but I think a slice with some homemade (vegan…) custard is just what the weather man ordered!

2. Mix together almonds, flour, sugar and salt. Slowly add the oil, and then stir in milk.

3. Lightly grease a baking tin, and press the mixture into the bottom and sides.

4. Par-bake for 15 minutes and before setting aside to cool. 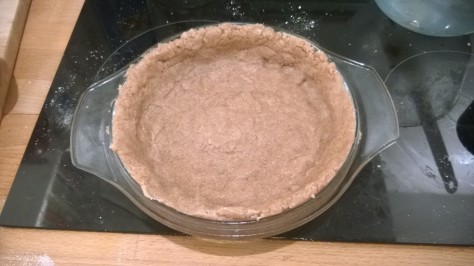 2. Spread the mixture evenly onto the base.

3. Peel the apples, remove the core and cut into slices. Layer on top of the frangipane mix, gently pressing them half way in. Sprinkle on some extra nutmeg or cinnamon to taste.

4. Bake for 35 to 40 minutes until the top is brown, and then set aside to cool. Once completely cool brush top of pears with melted jam.

5. Cool tart for at least another hour before slicing with a thin, sharp knife dipped in cold water.